I just completed a book cover design for a new novel by Marianne Kennedy.

[dropcap]I[/dropcap]n the tradition of Southern novels, Faces of Exile deals with the themes of isolation, seduction, discovery, and compassion. “Syracuse City” with its “Carter College” is the backdrop for a timeless odyssey. In cinematic fashion the plot and subplots tell the tales of those exiled in the small Midwestern town over the course of one year.

The main character is Eliot Bradley, in his attempt to move to AZ and become a journalist, lands instead in the small town of Syracuse City; A town filled with all sorts of transplants thick with regrets. During his journeys bus stop he looks over the town with curiosity and discovers a new revelation, that he can find comfort in this flat little town by disappearing.  He finds comfort in the small cafe called the “Berlin” and a smart out of place waitress whom he relates, Betty.  Not realizing at the time his sitting in the cafe sipping a martini out of a canning jar that Betty calls “lemonade” would become part of his regular life. 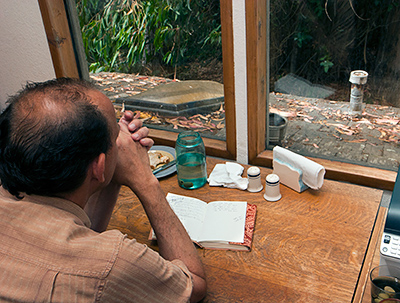 The Steps in the Creation:

The image of the model was taken in the Author’s office looking out a regular window and overlooking eucalyptus tree’s and a very nice view of Morro Bay.  I needed to create the illusion that the gentlemen was sitting at a café table overlooking a town street in the midwest.

I photographed several variations of the model with diner items on the table besides the martini jar: a plate with toast and butter, napkins, utensils, salt and pepper shakers and a journal to show he was a writer.  I desaturated and toned the image to look older and in doing so the green jar became an interesting visual point.  We all decided the simplicity in just having the martini glass made it more interesting and told the story more clearly.

Using Photoshop CS5, I cleared the table, extended the height of the image and removed the center support to create an open window pane to display the full scene. After all of that I was able to position the martini jar exactly where I wanted it.  We also had made the decision that Eliot was a man in is late 20’s early 30’s so I gave him a full head of hair.

To create the effect outside the window, I searched for multiple street scenes that closely matched the angle of my view point.  I placed buildings in the distance and gaussian blurred them to appear out of focal range.  Then I found a brick pathway and manipulated it to fit under the window.  I created a mock awning with stripes over the top of the window and distressed them to look like have been hanging there a long time.  I knew the perspective would not be perfect but it gave the image a more surreal feel of isolation.