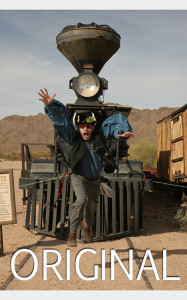 Photoshop is excellent in helping you create an idea that is believable.  If you are not an expert in using Photoshop the best way to learn it is to act on an inspired idea and just go with it.  There are so many resources on the internet to teach you how to do a certain techniques, so if you don’t know… just ask.  If you have a vision you have to at least try, if not, you will never get better at any software.  Personally, I have even gone back several years later and re-worked, even re-done some projects because I knew I found some kind of tutorial on the internet that related to what I wanted to do.

March of 2011 I went to Wild Wild West Con with a good friend of mine held at the Old Tucson Studios in AZ.  Normally a day at Old Tucson is a lot of tourists in shorts watching gunfight re-enactments or saloon hall musicals but this was a Steampunk display, which is basically a sub-genre of science fiction, alternate history, and speculative fiction.  Mostly, people wearing victorian garb with time travel adventure gear and futuristic “weapons” and gadgets, live stage performances and music.  A lot of fun!!!

I took this shot of my friend Clint in front of an old train engine.  Initially he stood there  and posed but then I said “hey jump in mid air just as if you’re running away from it”.  I got a really fun shot of him, however, to make it more than just a picture of a friend being goofy in front of a still train I had some work to do.

Step 1 – Removed display elements – In the first step I removed the sign and chain and the wood stair case on the left of the train.

Step 2 – Extended the height of the image so I could make more room at the top for a steam effect coming out of the stack.

Step 3 – I found a stock image of steam billowing off hot coals that was perfect to use for the effect of steam jetting out of the side of the train and the top of the smoke stack. To do this I duplicated all my layers and merged them so I would have a new Master Image 2 that laid on top of all the original layers.  I created a mask within the image and positioned layers with the steam on each side of the train between 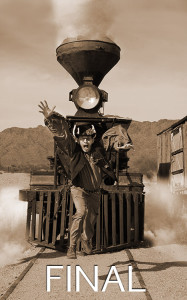 the new master image and the original layers.  I then masked away parts of the image where I wanted the steam to show through. I added a second layer on top of the Master with more steam and added a mask so that parts of the gating at the top of the smoke stack would show through.
A brief summary to this effect.  Please let me know if you have any questions or wish me to explain in more detail how I did some things.

Step 4 – Final: I did some layer adjustments with levels but thought Clint was a bit too dark in front of the train.  So I did a Brightness Contrast adjustment and masked him out only to make him lighter.  Finally, I copied all the layers again thus far to create one more Master Image 3 and overlaid on top of it a sepia effect to make the image look more vintage.  The sepia effect is a default action in Photoshop CS that makes is super easy to create.  If you still want to adjust the color within the layer masks you have that option.