Within sun kissed sands and low cliffs of the Sicilian coast the spirit of Ginici was born in the minds and hearts of her fathers father. It took many years of her life and the arrival of a most intriguing form of eastern spirituality to bring it to fruition. Chubby cheeked and wide eyed at age 6 little Gina was singing and performing in her parent’s living room: “I feel the earth move under my feet, I feel the sky tumbling down, a tumbling down….” The obliteration of Carole King’s song was no matter to her loving parents for she appeared to them a starlet. Ginici is about the journey of that soul from the recesses of wandering passion to the play of Hindi cinema. Come joins the hues of its many variant expressions: dance, photography, art. 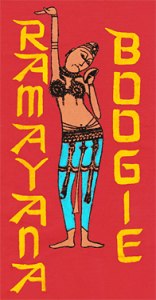 The introduction to the Buddhist philosophy came to her in the awkward teens. There was logic and deep meaning she was trying to grasp but mostly she saw it as a mystery and yet was so intrigued she was inspired to re-interpret images that fascinated her. Flipping through the pages of a book on Eastern sculptures Ginici was enthralled by the image of Ramayana dancing. The Sanskrit epic of Rama, an incarnation of the god Vishnu, who’s wife was abducted by King Ravana and is in essence about the journey of dharma. Also incorporating her love of dance Ramayana Boogie was born in a silkscreen created in Gina’s High School printmaking class.

Gina was the daughter of a photographer/aspiring actor and a painter/publisher, she has been surrounded by art her entire life. In High School she was into drama and dance and a mix of visual arts and her senior year she won a small scholarship for earning the title as Artist of the Year. She had the fortitude of becoming a professional artist herself and pursued a degree in art. In 1992 she acquired a Bachelor of Fine Arts degree in Photography at Arizona State University. Every semester she took dance classes from ballet, modern, jazz and even African.

Gina was always into exotic cultures but it wasn’t until she witnessed a dancer performing at a boutique opening that she became hooked on Middle Eastern dance. “I was working as a manager for Headshots Photography in a strip mall in Mesa. There was this small Pakistani clothing store that opened next to us and when they had their grand opening there was a belly dancer that performed before and after the fashion show. I was in awe, she was so beautiful and it was that day that I developed a determination to learn that dance form.”

Just a little over a year of taking belly dance classes Gina was dancing in as many recitals and restaurants she could fit into her schedule to gain experience. She has studied with Samia and Yasmina and has taken a multitude of workshops with well known dancers like – Suhaila Salimpour, Ansuya, Rachel Bryce and many others. She was a member of Alimah live drum and dance troupe for a couple of years then transitioned into another form of dance, Bollywood.

In the spring of 2004 she took classes with Samantha Riggs of Domba to learn Indian fusion combinations. Eventually the excited students developed a new troupe with Samantha called Boom Boom Bollywood. Just one year later Sam had developed a two hour production in which all the girls in the helped create “Bollywood Love Rules, A Tribute to Hindi Cinema.” The Barefoot Entertainment production was accomplished at the Scottsdale Center for the Arts in January 2005: “Performing in the Bollywood Love Rules show was truly one of the most exciting experiences of my life, I learned so much from that and I’m so grateful to have been apart of it.”

Since then Ginici has involved herself in a mix of projects. She competed three times in the Indus dance competition Hum Kissi Se Kum Nahin in which her second attempt won first place for a bhangra/belly dance fusion routine with Punjabi by Nature. She has performed in cultural events, private parties, dance showcases and charity events as a solo artist or with other groups such as the Aashiyaana Dance Company.

Her love of dance has immersed her into a community of dazzling inspiring dancers, musicians and loyal friends. She has made the art of Middle Eastern Dance and East Indian Dance not only her creative outlet for her own dance ability but an ongoing photographic record of its beauty and fluidity by capturing the root of the feminine spirit.