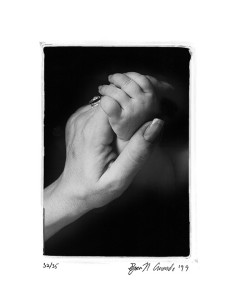 I love diving into my past projects. In the 90s I was photographing glamour portraits in a studio in Mesa, Arizona.  What a great experience that was to be able to transform someone with makeup, hair, and photography, and be able to showcase the images on a digital monitor right after the session.  On occasion, we would get asked to do a special project. One day a referral from a previous client called and requested we photograph hands for the Make A Difference Foundation in Arizona.  The Make a Difference Foundation is a non-profit that provides opportunities for the disadvantaged of all ages within the community.  They focus on educating the youth and helping kids, it is really a fantastic organization.

Every year they put on an elaborate charity event called the "Hearts and Hands Gala".  They wanted an image of hands in black and white that they could frame and give away as awards.  Each award was given away at the ending ceremony to community leaders who have given back the most for that year.

In a glamour studio, it's not exactly easy to think of photographing hands when you've been used to posing women with feathers and gloves. I e 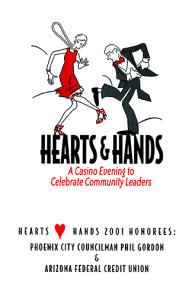 xperimented with several people's hands coming out of the ivy, shaking hands, praying hands, reaching hands, and so on.  It wasn't until a woman and her baby came in for portraits that we asked if we could photograph her and her baby holding hands. AND WE HAD A WINNER!

With the negative, I printed several awards in my darkroom using a filed-out negative carrier and numbered, signed, and dated each fine art print. They were so thrilled with them that they used it 3 years in a row for several different themed Gala.

Okay, so even though I was working for someone else and all the time and expense printing was my own, it gave the company I worked for a little publicity, and I and the owner Shari were able to go to some really fun and cool parties. Each party was formal so I got to dress up and go to each of these events; The Haunted Happening costume ball, 1920's Speakeasy Casino Night.